The insufferable Alex Lindsay is used to living and working in Rwanda, but even he seemed appalled by the conditions, poor lighting, and terrible audio at the new Shoebox Studio.

While Alex described another one of his idiotic ideas for 360° camera placement, Leo interrupted — the theme of any Leo Laporte show — with what Leo thought would be a funny retort. He looked over at Megan and instantly thought up a funny insult and, of course, he blurted it out immediately.

Watching Megan’s wince, as usual, makes it all worth it. Megan’s Laporte-induced winces are wonderful. They are life.

It’s been seven months since Tonya Hall — aka Two Ton Tonya in the chat room — has been “on the air.” Her well-run Marketing Mavericks show was always filled with great guests, but ultimately it was cancelled.

At the time, she lied and said it was going on hiatus and would be back when she returned from Russia. As best we can figure out, she never went to Russia.

Is she in Witness Protection?

Her Twitter picture looks nothing like her. We are sincerely worried about her well-being and future at TWiT.

Has Leo Laporte not allowed her back on the air because of her live humiliation of Sarah Lane, Leo Laporte, the TWiT Network, the City of Petaluma, and herself all at the same time?

We may never know, but we’re worried about her. Below, you can see her last known appearance, lurking in the shadows like a monster from an urban legend. We hope these grainy pixels aren’t the last we see of Tonya Hall. 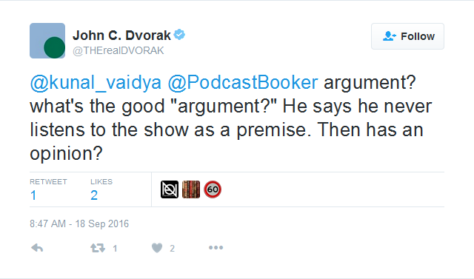 Self-appointed King of Podcasting Leo Laporte has been snubbed by yet another journalist, and Lisa Laporte has taken to her poorly written and formatted blog to try to spin it.

Yes, that’s right, everybody’s favorite “Huh… that guy is still doing stuff?” wasn’t the first person they went to, but instead they went to actual heavy hitters such as NPR and PRX. What a surprise.

Listen to Leo’s entitled take in the video above, but take away what really pisses him off and scares him.

Advertisers want to actually track the audience engagement rather than believing bullshit “listener” numbers that are the same whether someone downloads and never listens — as is the case with most TWiT podcast subscribers — or someone who listens to the whole thing.

TWiT’s business rests atop a house of cards made up of podcatchers that haven’t unsubscribed but never actually listen to TWiT shows. If advertisers understood this, they might stop giving TWiT money.

Leo Laporte had the brass fucking balls to call out NPR, saying This American Life only has a successful podcast audience because of the radio show, while failing to have a self-realization that he only has a tiny remainder of an audience left because he was on ZDTV/TechTV where they edited out his stupidity/misogyny/etc that we show unedited here.

Masterful CeHO Lisa Laporte took to her blog as she’s done in the past to give us such poorly written gems as:

If you want to have a successful ad-supported podcast, then focus on growing your audience, and then ad sales will follow.

The biggest challenge that Artisanal Agency faces is the lack of downloads on a show.

No shit, you demon-eyed fake CEO. Who lets this woman near a keyboard?

“FredtheDorfman” pointed out that this exact misspelling happened before. We can’t even keep up. Thanks Fred!

An eagle-eyed reader — who can still manage to watch The New Screen Savers — wrote in to make us aware that TWiT misspelled Leo’s “title” in the last episode in the Brickhouse.

They are big fans of misspelling lower-thirds on landmark episodes. Bryan Burnett — aka Male Snubs — managed to misspell Peatluma on the first episode of The New Screen Savers, and they previously misspelled this same word.

Maybe Yoko needs to allocate her resources toward correct spelling?

“That’s great, but who are the Chefs?”

This story was the result of a reader tip. Submit your own and join us in our chat.

Well-respected journalist and sometimes Apple shill David Pogue finally put Leo Laporte in his place during the pre-show on The New Screen Savers.

Leo tried to belittle his guest, saying he forgot Pogue was there, but Pogue came right back with a dramatic mic drop letting Leo in on what we already know: he’s not an important journalist.

We’d go one step further: He’s not a journalist at all.

Fake Android expert Ron Richards was thankful that no one would ever see the clip, saving Leo the embarrassment of anyone seeing the video above.

On Saturday, September 3, 2016, at approximately 11:31 AM Pacific Daylight Time, Leo G. Laporte discussed his upcoming absence with one of his The Tech Guy segment contributors, Scott Wilkinson.

During this exchange, Mr. Laporte experienced some difficulties controlling the TriCaster video switcher from his in-office control station, resulting in a limited outburst of anger.

Lisa Laporte — wife of The Tech Guy Leo Laporte and CEO of TWiT, LLC — has been known to stomp on engineers on her Instagram account while stating “Yes, I have worn my engineering team out.” Mr. Laporte has only occasionally abused them.

Leo previously stated that TWiT has the “worst engineers in the business” and forces them to configure the in-house Windows Active Directory with a Leo’s House domain name. Additionally, he stated: “Fuuuuuck. I have explained this about a thousand times.” to his engineers during an attempted live-streaming event.

In this instance, in frustration, Mr. Laporte suggested to Mr. Wilkinson that he might fire the entire engineering department — which just finished moving him into his much-smaller studio — and start over. Mr. Wilkinson appeared to be amused at the prospect of this occurrence, as he is by many things.

Correction: An earlier version of this article incorrectly stated the event’s date as 2015. It has been corrected to 2016.

An elderly man — The Tech Guy’s core audience — called in Saturday to get some help, apparently unaware that Leo Laporte knows nothing about tech that happened after 1994.

As the washed-up DJ was wrapping up the segment, the caller mentioned that he went on the same cruise as the pot-bellied host of the show. When the elderly gentleman attempted to tell Soup what he liked about the cruise, he was interrupted, as often happens to people daring to interact with Mr. Laporte.

Leo let us all know that he bought such an expensive cruise — perhaps topping his previous $22k cruise — that he will have an assigned butler for his suite aboard the vessel.

As his eyes popped out of his head — Graves’ Disease? — he exclaimed in jubilation that he would have a butler because Lisa Kentzell Laporte (also known as Yoko) refused to cruise without a butler.

According to Leo, Yoko needs a butler to bring her coffee in the morning, because her diabetic husband can’t perform the job anymore.

Wrapping up the call, as Leo often does when he should be working, he starts to shove food down his throat. Fuck you, Leo. How do you like that?