In a #TotalDrama exclusive, we are proud to present this first-ever look at the upcoming drama set to hit theaters in December of 2015.

Mike Elgum continues his uninterrupted streak of not giving a shit about professional broadcasting standards. Why even bother to learn how to say your guest’s name? It’s not like you woke up at 4:30 a.m. to start working on the stories.

There are those who say that ‘necessity is the mother of invention,’ now it can be said that ‘psychosis is the mother of crap.’ Father Rob’s unending quest to avoid seeing Helloworld’s illustrious tweets, combined with his unquenchable desire for attention, has caused the world to merit seeing this marvel of nothingness. I bring you today, a complete waste of time.

I wrote a program a while back that uses the Twitter API to scan through the connections of a few stalker accounts and block future trolls.

…and no one cares

It works beautifully. As they add new accounts, they automatically get muted/blocked.

….stop acting like a douche also works to curtail trolling

I was thinking about showing off the code for "Coding 101", but maybe I'll just keep this one for myself.

They changed the format, no more coding, remember

Sorry folks… I cancelled "Padre's Corner" tonight because I'm about to fall over. I'm doing ByB and some wraps, then I'm going to bed.

Thought that would get more favs

One major blow after another as the world was unable to get its hands on the magical code or see Padre’s Corner. We understand the need to keep this gem hidden from patent trolls but luckily our boys used their electronic archeological skeellz to unearth the coding treasure:

A masterpiece like this may stave off his sabbatical for another year but if the inevitable fortunes keep him away from Leo n’ Lisa it may not be what the doctor ordered. Helloworld was not immediately available for comment.

*Reminder* to cast vote for hottest people in tech 2014

Groundbreaking comedian and celebrated fire-crotch Louis CK recently appeared for a brief interview with Randal Schwartz on “Floss Weekly.” Here he is:

Leo Laporte is now eating so much and has gotten so fat that he can’t sit up anymore. Here he is on “Before You Buy.” 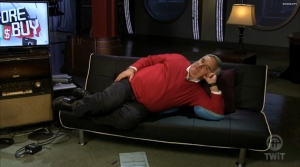 Advanced image analysis has been performed on this screen grab and troubling new information has come to light. Apparently, the Shit Twithouse is just a flophouse for the lazy owner, his dog and his girlfriend/wife/CEHo. There are wires and papers all over the floor, Leo has his feet on the couch and the employees are cowering in the corner—so the place is basically a dump.

If you’re in the Petaluma area be sure to drop in soon before the joint appears on “Hoarders.”

A blunder involving cutie-patootie-in-training, Selena Larson, may have been the straw that broke the camels back on a dark Monday in TWiT’s fabled history. The November day started with a routine TNT nightmare; guests forced to appear via phone, guests cancelling, typos in the lower third and Skype screw ups. But when TN2 starts, things usually take a turn for the better.

Sarah had a cold which made her voice super sexy and that may have been a curve ball  young Anthony could not handle on his own. Selena Larson is a favorite of #Drama, she is an expert in diversity and she shares many values with our humble site. However, when Selena (expected to make the #totaldrama top 15 hotties in tech year-end special) came on, Anthony lost his cookies.
See what happened in this video below.

If everyone is gonna post TNT screw-ups, I will too. Do you think she spells her last name with an “ei” in her actual name and an “ie” in her twitter handle.

Let’s get Mike to investigate.

In an age of incredible technological advancement and fast-paced news reporting, sometimes it’s nice just to be able to sit back and take in a world-class fuck-up. Mike Elgum and Lindsey Turpentine do not fail in this instant classic—presented here with no further commentary. Enjoy!

This is the man who takes trips around the globe on Google’s dime.
He also owns stock in tech companies, pretty sure including Google and Apple. But he almost never discloses that. He is a professor of journalism.

*Update* He is an “Adjunct Professor.” This was noted in a comment by BHB. I looked up what that is and you should too.