From time to time here at TotalDrama we take a break from the unrelenting #scoups and hard-hitting news stories and we do a “comedy piece”—but only rarely.

Most of the time on this blog we are laser-focused on award-winning journalism pieces that really make a difference. So it is with a light heart that we turn our attention to one of the major clowns operating within the TWiT Shithouse: Jason C. Cleanthes, aka EffenDunn.

He’s a dumbass. Not just any run-of-the-mill dumbass. He’s a major league dumbass. I mean like World Series closer dumbass.

OK. Well that was it. Hope you found that funny. Well, at least he likes animals. He’s also quite the little cunt commenter on Kickstarter; taking a bunch of projects to task for piddly reasons. Go get ’em, dumbass!

Horrible TNT co-host and stay-at-home-loser-Mommy Lindsey Turrentine insists on hiding her double chin behind a giant microphone “pop” screen. But we at TotalDrama have eyeballs and can see what she’s up to. We see everything. We see you. And we see your fat head.

Noted tech slut and superskank Christina Warren recently promoted a shitty story that Mashable wrote about a browser add-on. Read the comments on her promoted tweet to see that we’re not alone here at TotalDrama for hating on this unqualified piece of feminine hygiene waste known as “Film Girl.” Grow up, girl and learn how to properly promotoe real stories and headlines that stand up to criticism. At least she wasn’t wearing a hat when she tweeted this abortion of a story.

How dangerous software maker Superfish kicked me out http://t.co/70mJ11LdDq via @mashable

Keep in mind, these are Mashable commenters on a Mashable article, not Total Drama commenters. Even their own readers can’t stand this kind of shit.

Leo Laporte is apparently getting his ducks in a row to kick the lovely and talented Sarah Lane to the curb, le finiti. In this video (above) we see how he warms up his zombie-audience to his reprehensible plot. In the continuing mission to save money, the dysfunctional tag team of Leo ‘n’ Lisa have determined—yet again—that rather than paying broadcasters to host shows, it is more economical to have whomever is around take a shot at it. Based on the public figures spewed on-air by Laporte, it is estimated that Sarah is pulling in a meager $450 per episode for the show she created and built while Leo slurps up the bulk of the profits.

With two idle hosts on staff, either Moronne or Moron (aka Elgum) will be forced into a sad attempt at replacing Sarah in order to save the glutton the $450 per show that is paid to said goddess. Asked for comment, noted Sarah Lane expert Richardya said, “This turn of events could be related to a recent Instagram photo (seen below), which conjured up images of the ‘dark triangle’ [that] Laporte can’t get out of his head. It is also known that TechCrunch is planning to enter the podcasting sphere which could leave the failing TWiT network in ruins.”

P.S. Nice try – lying once again about this being “abrupt notice.” Sarah informed you about the trip weeks ago. We see the schedule online fat man.

In a stunning turn of events, TotalDrama has been forced to issue a public apology and would like to make the following corrections to the record:

Mike Elgan trumpeted the 1200th “Tech News Today” show like he had anything to do with its success.

Not a word was spoken about the legendary groundwork laid by host Tom Merritt, Sarah Lane and Iyaz Akhtar.

Which leaves us only with the fact that Elgum is a shameless douche. And this sad cake is just an example of the empty-chair, empty-head attitude that reigns at the “new” TNT. So we at TotalDrama hope you choke on your cake, Gum. You didn’t earn it.

According to a report from the respected 2 Paragraphs blog and from YouTube’s own information, TWiT shows will not be able to display the opening screens of advertising (title cards) for such scams and worthless products such as Personal Capital and NatureBox :

Here’s an example of a title card from the “Marketing Mavericks” show (note that there are only 25 views) that is soon to be banned under the YouTube rules:

Good luck to Leo ‘n’ Lisa with the impending changes. I guess that means that instead of the usual 25 views of “Marketing Mavericks” they’ll have to make do with three people watching on the revamped TWiT website—if ever that happens.

Get a grip, Morrone. You’re on a video show for fuck’s sake. Have a little pride in your appearance.

UPDATE: How about this for a suggestion for Megan? Tell the brilliant minds at TWiT to fucking turn up the lights and color balance you to an actual human color.

Elgum will literally (attempt to) read anything put in front of him on a prompter. He isn’t able to do this very well, of course, but today Megan Morrone co-hosted the shit-show called Tech News Today, and she had a joke of a story in the “News You Can Lose Segment.”

Why is this segment in a news show they want us to watch?

Leo Laporte has crowed over and over about how TWiT is aimed to be the CNN of Tech, but the following video illustrates how that’s a crock of shit.

The editorial board of Total Drama presents to you:

Mike Elgan Believing a Story
About a Wearable Banana 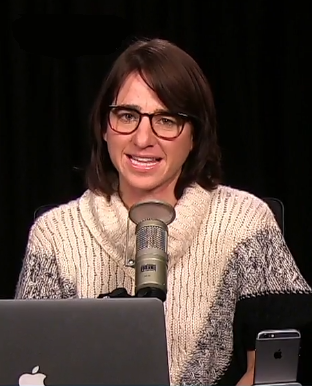