We have recently reported that Leo Laporte and TWiT CEO Lisa Kentzell in a fit of rage have ordered immediate removal of all content made by Tom Merritt, Brian Brushwood and Justin Robert Young from the internet. During yesterday’s The Tech Guy show Leo showed his GMail account. The main story from that screenshot was apparent planning of firing Shannon Morse, but there was also another conversation visible. There Patrick Delahanty reports back to Lisa Kentzell saying “Hi Lisa, Knowing that you wanted the files inaccessible ASAP, I renamed the directories because…” She responds with “Thanks Patrick, I figured this out after talking to Bear. With all the chaos going on I wanted to be…”

Today, there we have two new developments. First, Leo showed us his GMail again: 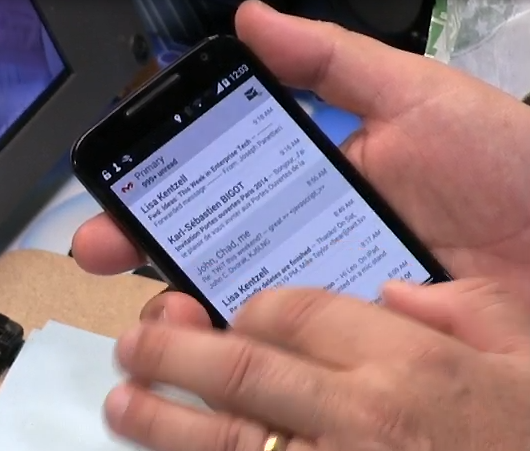 Here we can see another email from Lisa Kentzell reporting that “cachefly deletes are now complete.” This was so urgent, they made people work over the weekend to remove all traces of the hosts they have banned from the network.

The other development is that the dissent seems to be harder to contain, even in heavily controlled #twitlive chatroom. After several question about the removal of NSFW from the twit.tv website, Leo Laporte went there to try to explain

I guess ll got autoreplaced with Leo Laporte in the second line there so it likely should have read: “we’ll be deleting other old show.”

It’s probably the embarrassment of having acted so petty, that is forcing Mr Laporte to be caught in another lie. Surely, the removal of NSFW, Frame Rate, Tech History Today and others from YouTube wasn’t caused by Google emailing their concerns about disk space. And lets not forget that Cachefly, long time TWiT sponsor, would not be to happy with Leo claiming their product can’t handle large quantity of data. Caching huge amount of data is their core business.

The lesson that a content creator associated with TWiT should learn here is: backup your content now! Your work might be deleted at any moment. Even if you are on best terms with TWiT they might delete your show, just to justify their vindictive purge as “removing old shows” due to “disk space shortage”.

The full scale purge at the TWiT seems to be continuing. During the live stream of Leo Laporte’s The Tech Guy show, less than an hour ago, he showed his Gmail inbox. It shows an email conversation with subject “Re: Shannon” where TWiT CEO Lisa Kentzell seems to be discussing a new co-host for “Coding 101” programme with Robert Ballecer, show’s other co-host.

As it was the case with Amber Macarthur’s show cancellation, Ms Morse is probably going to be the last person to know. Kentzell is most likely waiting for an opportune moment when Shannon is not around to drop the news.

Our best wishes to @snubs in this difficult time.

Unsurprisingly, Shannon Morse is not privy to the conversation about her:

@transitivity1 news to me!

I might be difficult to see from that video, but our forensics team has been able to decode the part of conversation visible on screen:

As Leo Laporte continues to escalate the conflict with most every former TWiT host, it is important to take a step back and and set the record straight about what exactly has happened.  And this is exactly what the hosts of the Night Attack show, Brian Brushwood and Justin Robert Young have done last night in the Episode 32 of the programme.

The events unfolded in the following order:

Here is the clip from the Night Attack 32 where Brian and Justin explain what happened in two minutes,

Following our disclosure of his stream of rage triggered profanities, it would appear that Leo Laporte has ordered a full scale history rewrite. Shows featuring Tom Merritt, Brian Brushwood and Justin Robert Young are being deleted from every location on the internet under control of TWiT.

This morning, visitors to twit.tv/nsfw page were greeted with a big “access denied” warning, and every attempt to look at the archive of the show on that site failed.

Further investigation showed that the NSFW show was not the only victim of this purge. Frame Rate, Current Geek Weekly, Tech History are also gone from the twit.tv web site. The attempt to erase these people from the internet did not stop there. TWiT staffers were ordered to delete all Youtube uploads of this content as well.

Efforts are under way to restore archives of these shows. Mr. Laporte is probably regretting his decision to release TWiT network content under a Creative Commons license as that makes it impossible for him to take a legal action and prevent the restoration of the show’s archives.

As it has become his custom, Leo Laporte went to his chatroom to to vent. Early this morning he posted this:

He’s referring to episode 31 of the Night Attack show. It is clear that he has not listened to the episode in question and that he probably got trolled by one of his minions, telling him how they were being “attacked” and “slammed”. Mr, Laporte then goes on to demand an apology:

The investigative team here at Total Drama managed to obtain what exactly it was that Mr. Laporte was writing. Here is his message to Brian Brushwood:

To Justin Robert Young he had similarly kind words:

You see how in the chatroom he pretends he was civilized and demanded an apology, while in fact he was spewing insults left and right without even knowing what he was talking about. But that has unfortunately become Mr. Laporte’s modus operandi.

But this is not where the insults stopped. No, Laporte went on to Twitter to tell his half a million followers that Brian Brushwood was “a drunk” and an “asshole” and that he was attacking him and his family. Those “attacks” never happened.

@PatTrudeau @shwood You tell me. What would you do if some drunk asshole insulted you and your family?

And another public attack on Brian Brushwood:

@shwood @IdeaJason I’ve been nothing but kind and positive to Brian but what would you do if a drunk attacked you and your family?

This just adds to mounting pile of evidence that Leo Laporte is one of the worst kinds of cyber bullies, using his great number of followers to spread lies and baseless accusations without bothering to check any of his facts. And if you point out this, you are being called a “troll” and he will send his army of minions against you.

For the internet to thrive, we need to find a way to stop bullies like Laporte from contaminating the public discourse.

It turns out that Leo Laporte follows our news site closely. Just a few minutes ago he stopped by #twitlive chatroom to share his thoughts. It’s important to note that the language Laporte uses is not always that precise, so a translation guide is in order. When he says “troll” he means someone who criticizes him, points out the falsehoods he spreads. Laporte said this explicitly during the height of backlash over his destruction of the TNT show at the end of 2013. “Trolling is criticizing in public”, he said adding “if you want to send feedback, put it in an email to me, don’t say it publicly”. Keeping this in mind, this is what he said in his chatroom:

<~Leo> I think there’s another server where the trolls hang out
<~Leo> At least two of the most active users are mentally ill. It’s disturbing but I don’t believe they’re operating normally.

Not only does he follow #TotalDrama closely, he even know the mental health status of our contributors (this probably violates about half dozen statues about disseminating medical information). Our Google Analytics confirms his regular following as we have 10-15 users from Petaluma, CA and now we know one of them is Mr. Laporte.

#TotalDrama is proud to announce our latest feature: DVR functionality for the TWiT live stream. Select DVR option from the top menu and you can go over the past couple of days of the live stream, see thumbnail previews of the video, watch it, and download it in convenient 30 minute segments.

Never again miss that super funny moment that you just saw. Uploading clips to YouTube has never been so easy.

Telling #Truth is not popular in all quarters. To see just to which length some sick individual will go, you don’t have to look much further than Robert Ballecer’s twitter account. Our previous article documents his lies and intimidation attempts where he mistakenly thinks that photoshopping my face out of a picture (although very creepy) would prevent us from exposing his perverted ways.

Others tried more direct approach. This is an email that has been sent to our hosting provider in an apparent attempt to take #TotalDrama down:

Good thing our hosting provider values free speech more than an attempted by a random internet troll to shut us down.

A regular #TotalDrama reader alerted us to the following tweet by Robert Ballecer:

Interesting… found out that one of our trolls does most of his trolling from work. hmmmm….

First, lets clarify some of the language here. At TWiT “troll” means “person who disagrees with us in public”. This according to the company owner and soup connoisseur – Leo Laporte.

Ballecer should know that some employers can be very  tolerant, so his attempt at extorting the truth teller in question might not work. He is working for one of them. At his workplace child abuse and pedophilia is dealt with by protecting the offenders, moving them around to new safe locations, where other children are in jeopardy of being abused.