People should be respectful on Twitter and not curse. Ethics.

The Triangulation program featured an interview with the Personal Capital CEO who just happens to be TWiT’s largest sponsor. Move along, move along. Or……

Take ‘native advertising’ and multiply it by 400 and you get this. And I was trying not to discuss TwiT. You try to get out and they pull you back in. (For more info click here)

Does anyone remember the name of the song by the son of the guy who played the dad on Growing Pains?

And now people are emailing me that he is asking a (female) employee, Megan, if it is o.k. to “be salacious” or hit on her and she responds “I don’t mind it, uh……..but I can’t speak for everyone.” Put an employee on air and ask her if it is o.k. to do this and see what she says. THAT IS THE DEFINITION OF DURESS.

Once again we have the victim saying; I don’t mind, I am tough I can take it, it’s cool, don’t worry. No one at twit will do anything, no one will say anything not to the boss and not to his wife the CEO.

UPDATE: The g-mail address is no longer live for tips, I do not want to be notified about this stuff. I don’t watch TWiT so Stop sending me this stuff.

I guess the best place to start is at the beginning. Where did Drama come from, who are these drama people and what was the genesis of the movement that shook Silicon Valley to its core, and of course, what became of them? It was December of 2013 when the news broke that Merritt was not being rehired and Elgan was taking over TNT. A few days later iYaz quit and soon thereafter there was the incident involving the lovely and talented Sarah Lane, later the duo of Brian and Justin were banned, then Amber, lies, Shannon, more lies, Chad and on and on.

But it was in January and February of the 2014 year when people were being kicked from the #Twitlive chatroom for voicing their opinions. The moderaters elevated their nastiness and lie upon lie surfaced to quell the distrust. A new IRC was set up in a place called Europe for the Cordkillers show and being that many of TWiT’s shunned outcasts congregated there, a certain amount of negativity towards TWiT would constantly bubble up to the surface. It began to disturb the shows so the guy who ran the IRC created a new room where people  with Drama could voice their opinions without derailing the programs. It was a quarantined area similar to New York in the movie Escape from New York. They banished all the trouble makers into one place away from normal society, and he named the room what you already guessed, #Drama.

The room quickly became the place where everyone with issues against TWiT came to vent and laugh. The laughter was a major component as many people laughed at some of the insanity going on at their former infotainment home. People traveled great distances to #drama from all walks of life. Many came who had never even watched recent shows but had issues from days gone by. There were varying degrees of hatred, as some had issues with this whilst others had issues with that. Famous Podcasters, current twit hosts and former employees all came by to pay their respects.
That chat room grew and had much to say.

Soon people came to #Drama for news and truth. It was then that the blog was born. An IRC was deemed too small and the message to great. Magnificent works of art being showcased on YouTube and Gifs that were worth two thousand words were displayed in this humble IRC. The content in IRC was expanding and needed room, it needed a website…..

One member and one admin started the blog with no stated purpose. They moved away from the cordkillers IRC and created totaldrama. It grew organically with no structure. More and more came and anyone, even myself,  was allowed to write for the site. As time went by totaldrama.org got sources, real sources and experts. People who wanted to know what was up came to the blog daily. Scoops broke here, if someone was fired, if a lie was exposed or if a video was made it would be on TD.O first. Chad’s firing, Shanon’s firing, Sarah’s replacement and other scoops. The numbers were staggering and the blog kept growing. There were many who tried to mimic its success and others who tried to stifle the site but neither met any success. So it evolved and morphed and evolved some more.

At some point the original admin went MIA [Missing in Action] but the blog continued. No leadership was ever needed and no authority was ever pressed. The organizational structure would best be compared to the terrorist group Al Qaeda. No leadership alongside a bunch of nutcases who all had their own agendas (including me) writing away. Most lived under the shade of anonymity as a harmony of disharmony ensued with surprisingly little arguments or drama. Ironic. The content of the site became precious, my precious. But without an admin on hand, worry came front and center. No one knew how long the site was paid for or where it was even hosted. Many of you remember the next event that became known as the Exodus to the EU. A great deal of technical knowledge was needed to move the site without admin access. Let’s just say l33t skeelz were needed.  So the site moved and .EU was unearthed with new admin but mostly the same characters and writers.

The burgeoning community had aspects of both a utopia and dystopia (which is not a word according to spellcheck, #WTF) Now, were lines crossed? Probably. Did people voice their disagreement when this happened? Always.   So if one disagreed with a name calling or a picture or a target, the dissent would be heard. This was the redeeming factor, In Sparta a man is held accountable for his words, even a messenger.

And so it went that .Eu was the new home of drama. Days and weeks went by with more scoops and more news and always drama. But when the benefactor of drama left, despair took hold as the days of Drama seemed destined to end. But so it came to pass that a new benefactor came and once again there was peace for drama. One man alone was writing and another did admin and they battled the naysayers and continued amidst gloomy days and nights, but soon even these happy days would end.

One need only to look at the Twitter account of one man to see that he did not view drama lightly. His enemy, they were, and he swore to stop them. And so it went that this man huffed and puffed and blew and drama fell. Just as Europe fell in WW2, so too .Eu fell. And so it goes, drama was no more.

The question that remains is ‘what now?’ It seems the original .org is still afloat. What now? Like all great riddles of the universe there is no answer….no one knows.

Long live Sarah Lane and may God bless America and not Europe.

The lovely and talented Sarah Lane is cutting the ribbon on a new show via TechCrunch called “Crunch Report.” The debut is set for March 23rd at 4PM Pacific but being that it is not live, the start time seems inconsequential. The show will be daily but it is unconfirmed if Sarah will even be hosting. We do not as yet have sources inside their HQ, we need like a week or two. It was described by an insider as a visual version of the Techcrunch website.

People looking for anything other than news in this post will have to wait. Those days are gone. Not gonna happen. People change, it’s called a metamorphosis, so there is nothing else to say. Keep dreaming. But we are looking forward to her input on the set design.

Why totaldrama became the number one [#1] destination of everyone in Silicon Valley is beyond me, those people have issues. Anyway, there are two types of people in this world, the people tuning in to watch her show debut and the bottom dwelling, scum sucking, backstabing, evil, heartless and worthless a-holes wasting good oxygen. Which are you, grow up and pick a side. 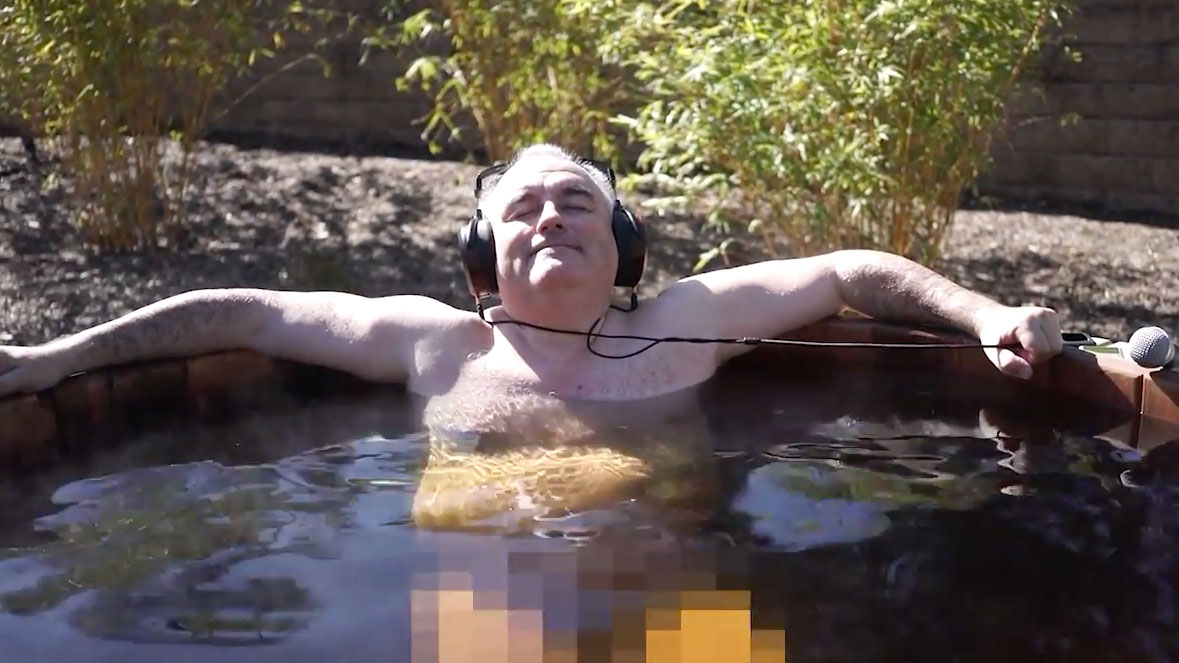 TotalDrama is putting a pin in this idea.

You heard it here first:
Tubcasting is the new podcasting.

Here’s the original post. But now that Leo has expanded his studio to include a tax-deductible vat of slimy water in his backyard, the editorial board at TotalDrama is committed to the idea of spreading the word “tubcast” to describe the lazy type of broadcasting that Leo Laporte engages in. He’s a tubcaster now.

We at Totaldrama are fair—truly. We watch TWIT and comment. So to that end I set my alarm for 6 a.m. PST to participate in Mike’s live broadcast from MWC.

A disaster. Truly. A clueless mumbling Gumbot cabled to a camera. Were wireless mics not in the budget? Showing the audience reams of fitness bands and smart watches. Talking to some toothbrush manufacturer about their smart brush. Eventually telling the spokesman, “Enough of that!”

Quote of the day: “This appears to be um, ah, err…a wearable shirt”

So no discussion about the Intel press conference going on at the same time. Nothing about Google becoming a MVNO. No hands on with anything that anyone would actually buy.

And it ended with a stumbling ad read.

Again for real coverage check out Android Central (Phil Nickinson is a good friend, of someone at least), The Verge (we love them, they might not like us much), Engadget, PC Perspective (Ryan Shrout, you’re too good to be on TWICH) and almost any other technology site on the internet.

UPDATE: A irate commenter reported that our close personal friend Phil Nickinson is a douche. Ouch.  So try Android Police instead.

For more news read The Verge or Engadget or Techcrunch.