Subtitle: “TWIT can be accessed by anyone with a Web browser, and once you log in, you’ve tapped into a global braintrust.”

We don’t want to ruin the rest of the article, but it appears to have been ghostwritten by Father Robert Ballecer. There is lots of puffing up (get it?) of FMCP, including two pictures of him.

In the latter picture, it appears Fr. Ballecer is proud of being squeezed to death by his priest costume.

The TWIT chat room does have its down side. In recent years, trolls have been so unpleasant that Laporte considered ending chat. Many moderators quit.

“These trolls are really vicious, horrible people,” Laporte told me.

How horrible? Someone recently made fun of the fact that a chat room regular known as Tater passed away.

Is this real life?

@PCMag would you mind removing my image from this article? https://t.co/i2OlYJs92W I'm not with that company anymore, basically was fired.

@PCMag over my honeymoon to make matters worse. It just brings up hefty bad feelings, and I have lots of respect for you. Thanks!

@PCMag why don't you replace it with an image of Louis and Ballecer? After all, he took over on Coding 101. I see no reason to be included.

Additionally, she replied in the source article’s comments. 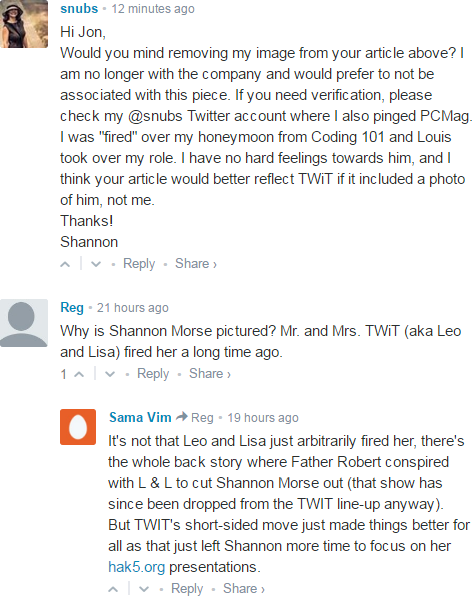