Sometimes people tell the truth, one does not need to edit, crop, cut or juxtapose, you can even forgo Ken Burns effect, you just need to listen:

Facts:
Soup returns and is confronted with questions about the ban.
Soup proclaims they are “not banned.” (probably another lie)
Soup gets mad over nonsensical reason and bans them
-This three-act play took place in just four hours–

Will these guys finally realize that TWiT is totally insane? Apparently TWiT was upset about the openness B&J exhibited, specifically the comment that TWiT “don’t care about content creators.”
Bullshit.

Laporte has prides himself on his openness with his audience.

This man has publicly mocked (Merritt’s) TNT. He ridiculed No Agenda as conspiracy theory nonsense. He said Brian & Tom stole Framerate.  He said Lamar Wilson stole his show. He wished death on Steve Jobs. He lied about what Erik Lanigan did and ruined his life. He embarrassed the head chat mod for running his IRC for ten years. (<-that I’d let slide) He called Andrew Zarian a slut. He mocked Pirillo after he was blessed with his first child.He said he couldn’t afford Tom. He insinuated bad things about Iyaz for resigning by email whilst he fired Lanigan by text and he forgot to mention to Amber her contract was terminated. He said Kevin Rose and Dvorak copied him. I forget what he said about Dvorak and O’dell. He humiliated the lovely and talented Sarah Lane on camera. He complained about how much money Veronica charged him. Shira Lazaar and many others  got too big for him………And Brian and Jury went too far? They are dead to TWiT?

The first ban justification was “leaving with ads” the second was “trolling” and now “what they said on air.” This is the same fabricated story-after-story pattern he enacted to explain why Merritt was not rehired. How many videos does Captain Juno have to make documenting these lies? And if you’re a fan and still taking Leo’s side, please think about it. Don’t blindly follow. If you agree with him fine, but please let this stuff swirl around in your brain and then form an opinion. If you currently work at TWiT, be realistic before shunning these two guys and exacerbating the problem.

And Leo should not get mad at Amber MacArthur for her tweet about not knowing she was cancelled. Maybe the self-obsessed knucklehead should have called her. She speaks about him like he is royalty. Will he turn on her too?

Do what Merritt did, divorce yourself from that network and erase them from your memory.

Approximately 38 days ago Helloworld discovered twitter and  was asking what “RT” and “MT” were and  “how do you favorite something?”

Then he started having fun on twitter with Jarvis, Gumbot, #soup and company. He made some fake twitter accounts with zero followers and said some hilarious mean shit to those people. And now, today, some of these great thinkfluencers  are writing articles, dedicating podcasts and going on worldwide speaking tours to discuss Helloworld or what they call “the massive troll dilemma on the Internet.”. Has the world gone mad? I swear, the kid is seriously going to get legislation enacted because of his actions for a few lulz. Helloworld, playing on his iPhone, probably while taking a dump is going to change the world. Jarvis will eventually be speaking to the US congress about this, mark my words. (not really but)

But can twit make fun (troll) of news outlets?

Everyone is pointing and laughing at this tweet from CBS News http://t.co/GiArFD84Mg pic.twitter.com/5QJ2skjsLQ

It is infuriating. TWiT ridicules the US Senate, the US supreme court, mainstream media, the EU, China, Russia, major corporations, CEO’s, clickbait journalists, native advertisers, FCC Chairmen, fans, everyone under the sun but if you make fun of them you’re a troll?

It is sweet that Brian, Justin and Tom all had nice things to say about TWiT upon their departures. It shows a modicum of dignity and appreciation for what they were given, but wake up. TWiT lied to you in order to not pay you. Jesus Christ, last week he told Sarah Ipad Today costs $400,000 a year. [retraction – meant 400K all time which is probably right. He just neglected the detail of the income made off the show] [retracted] He lies through his teeth. Distance yourself from TWiT. I wish no ill will on anyone in Pataluma. I hope they all do well but it is time to move on. The man only makes $350,000 annually from radio gaga yet he throws money away like garbage. He pays his GF about 200k a year for seventeen hours work a week. Every show does not lose money, awake from your slumber Rip Van Winkle. Why does “TWiT needs a new business model” because of exiting talent? Every show that left was “a money sink” according to him. Those two statements do not jive.

Laporte needs to do some serious introspection and do a  Mea Culpa. He needs to find this from within, no one around him will guide him. If you look around and see everyone you have previously worked with is hating you and your fans are leaving you maybe maybe it’s not everyone else with the problem. Many people do not know the end of the story of the man with the Midas touch. He almost died. King Midas starved because his food turned to gold and he was unable to eat.

What do I know? I am just another moron fan in the chat. 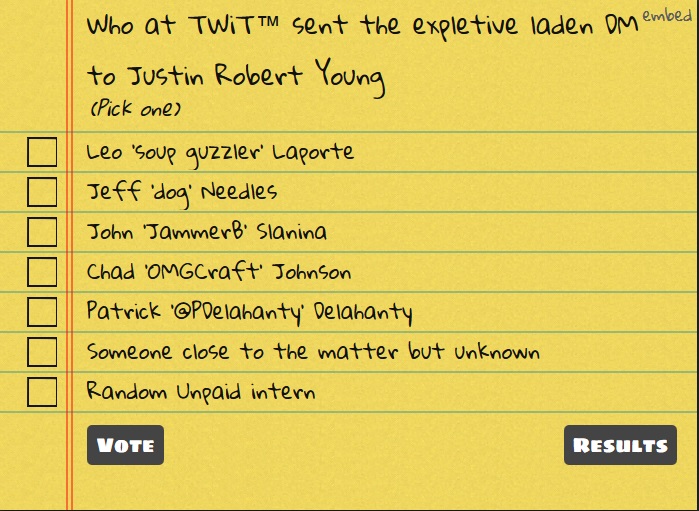